Fatigue Testing
The ARROW-LOK™ implant possesses strength characteristics in
order to avoid the failure events that have been reported with other
intramedullary designs. The material is standard implant-grade F-138
stainless steel that has proven itself to be durable in many applications
in which cyclic loading must be endured. In addition, the design of the
ARROW-LOK does not introduce stress-risers that could become points
of failure.

The ARROW-LOK implant was subject to force control at 10 Hz with a
sinusoidal waveform having a minimum force of 18N and a maximum
force of 89N. After 250,000 cycles, the specimens showed no signs
of cracking or any other indications of fatigue damage.

Dynamic Four-Point Bend Testing
Four-point bend testing was conducted by the Georgia Institute
of Technology’s Mechanical Properties Research Laboratory in
accordance with the methods prescribed in ASTM F 564-02,
Standard Specification and Test Methods for Metallic Bone Staples.
In this test, the ARROW-LOK device with a 3.5mm diameter arrow,
1.5mm shaft diameter and 50mm in length was compared to the
K-wire (1.6mm diameter X 50mm long). 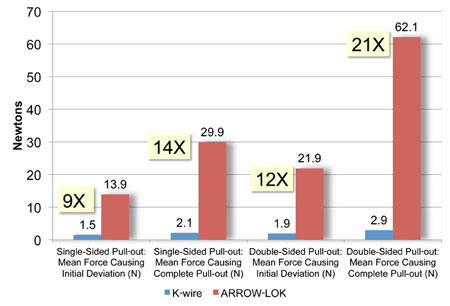 Testing was conducted to evaluate the force needed to pull the 3.5mm
diameter ARROW-LOK and a 0.062” (1.6mm) K-wire out of polyurethane
block and bone models.

The mean force required for initial deviation of the ARROW-LOK was
21.9 Newtons (N) compared to 1.9N for the K-wire. Complete pull-out
of the devices tested required a mean of 62.1N and 2.9N respectively.

Rotational Stability
A high resistance to rotational forces would indicate that an implant will hold the bone segments securely enough to enhance fusion. The
ARROW-LOK implant resists rotational forces up to 12 times more
effectively than a K-wire. 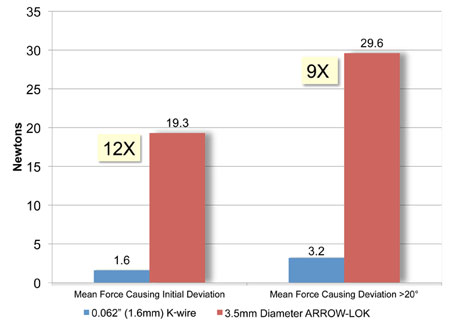 Testing was conducted to compare the rotational forces necessary to
produce movement in a polyurethane bone implanted with either the 3.5mm
diameter ARROW-LOK implant or a 0.062” (1.6mm) K-wire.

The mean force required for initial deviation of the ARROW-LOK implant
was 19.3 Newtons (N) compared to 1.6N for the K-wire. Rotation to a point
greater than 20° required a mean of 29.6N and 3.2N respectively. The data
indicates the ARROW-LOK exhibited significantly greater resistance to
rotational forces than the K-wire.