Commit to trying ARROW-LOK™ on at least five patients while closely following the recommended technique. 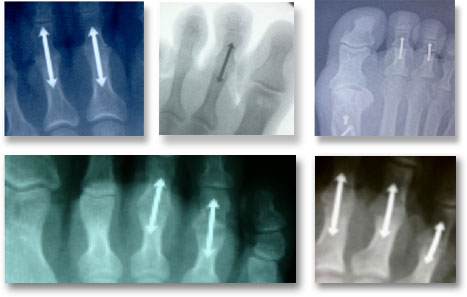 As simple as the ARROW-LOK™ is and uncomplicated the operative technique may be, please expect to take at least five cases to become comfortable with the product, the operative technique and how the design interacts with the anatomy. Five (5) cases will give the surgeon the opportunity to experience the simplicity of the ARROW-LOK system on patients with varying bone quality and assorted anatomical variations.

Review the preop radiographs and the patient exam. Utilize the
ARROW-LOK™ Radiographic Template.

Consider that the removal of bone from the ends of the proximal and intermediate phalanges will result in 3-5mm less length for the implant.

Notice where the width of the intramedullary canal is less than the 3.5mm diameter of the ARROW-LOK™ implant. Measure to ensure there is enough length to accept an implant, considering that the length of the implant includes the 3mm length of the arrowhead tip.

Expect the unexpected. Be prepared.

Ream down the center of the intramedullary canal. 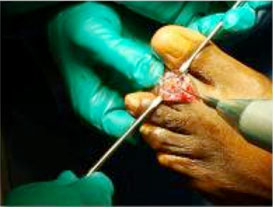 Aim the reamer 1-2mm plantar of the geometric center of the intramedullary canal. Placing the reamer in this orientation will help ensure that the pilot hole will be as close to the center of the intramedullary canal as possible. Why is this important? Some surgeons have a tendency to ream too dorsal because that is the technique they use when implanting K-wires. Reaming too dorsal can cause the implant to catch on the cortex upon insertion, preventing it from smoothly advancing down the broached cavity.

Broach straight in and straight out. 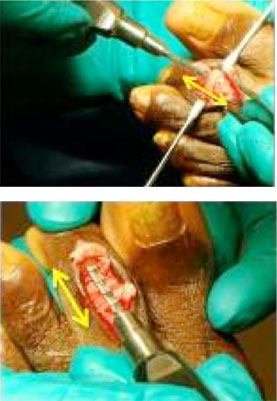 Advance the broach carefully into the pilot hole. Avoid wiggling the broach when inserting. Doing this will enlarge the broached cavity, reducing the amount of interference fit provided by the arrowhead tip.

If the broach does not freely advance, strike it gently with a small mallet.

In harder bone, the broach may be difficult to insert by hand. In instances like this, use a small mallet to advance the broach. Remember the broach must go straight in and straight out. DO NOT wiggle the broach.

Gently strike the broach straight on. If the broach stops advancing and/or the tone created by the hammering changes, STOP HAMMERING to ensure that the bone will not fracture. Consider shooting a picture to evaluate the location of the broach in the intramedullary canal.

When broaching in hard bone, advance it carefully in 5mm increments. Remove the broach to allow the bone to “relax” prior to continuing the broaching process.

Remove a broach that may be difficult to extract by pressing your thumb against a pick-up. 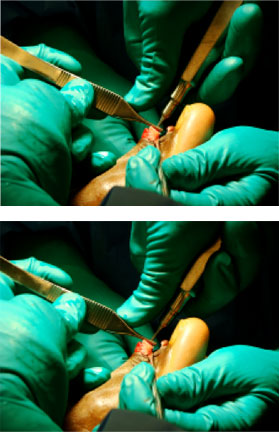 Keep the insertion forceps engaged on the implant until both segments are compressed against it.

The insertion forceps serves as a positive stop for the implant, preventing it from advancing further into the proximal phalanx when compressing the intermediate phalanx on the distal end of the implant.

If the implant is not advancing and seems stuck:

Gently wiggle the implant in the plantar direction.

Lightly strike the insertion forceps with a small mallet as close to the implant as possible.

“Walk” the arrow down the broached cavity by rocking the implant medially and laterally while exerting pressure.

Once the implant is inserted, resist the urge to grab the toe and exert a pull-out or rotational force to test the stability of the implant.

Once the ARROW-LOK™ is implanted, resist the urge to tug on or twist the toe to evaluate the stability of the implant. This should be considered destructive testing and may compromise the fixation of the implant. 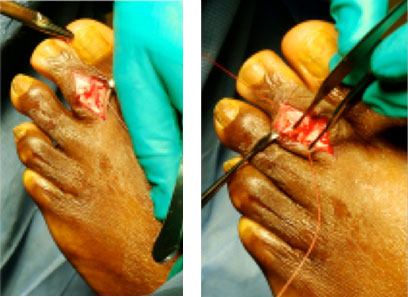 Reapproximate the extensor digitorum longus tendon and the medial and lateral collateral ligaments to help further stabilize the proximal interphalangeal joint that has just been fixated with the ARROW-LOK implant. The more stable a fusion site is, the faster union takes place.

What happens if the implant doesn’t fit regardless of what I do?